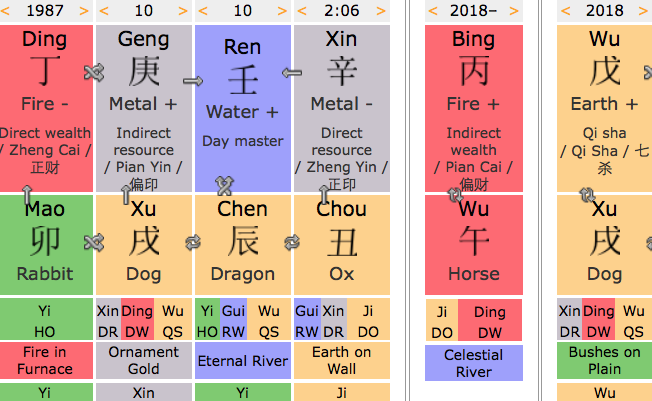 Ren Yang water DM was born in Yang Earth Xu month when the Qi of the earth and metal is prosperous. Though the qi of the water is weakest in Xu month, this Ren water DM gets support from Metal element Geng and Xin which get support from Xu and chou earth element. Hence the flow of the elements in this chart is auspicious as Geng and xin served as an important mediator between the fight of earth and water. Hence we can conclude that the strength of Ren DM is slightly weak and favorable elements would be water and metal. Favorable direction would be north and west of his birth place.  Since Geng Xin plays a vital role in this chart, Ren DM would experience some hardship in life when they are clashed or harmed.

When we interpret a person’s wealth and career through one’s natal chart, we first look at the Output, Wealth, Power and Resource stars and the qi flow of these stars. In this chart, there is a very good circulation between the qi of the Power star – Resource Star- DM Self.  This generally indicates a successful career if Luck cycles are also auspicious. To determine if this DM has a chance to gain wealth, we first look at the quality of the wealth stars, then we find the quality of the Eating God. In this chart, there is only direct wealth star and no indirect wealth star, this generally indicates that it is not wise for this DM to involve in risky investments (ex. Stocks) or gambling.  It will be best for him to have a stable career where he could earn regular salary.  It is auspicious there is Hurting Officer star Mao to support Direct wealth Star Ding, though the qi of the Mao is very weak and therefore couldn’t offer much support to the Wealth element Ding. Hence this Ren DM would have no problem to have a stable career and life though it will be a quite challenge for him to gain great financial success. The most suitable field would be metal and water related.

Suggestions:
1. The most suitable work field for you is water or metal related. A few examples would be finance, banking,  transportation,  tourism, insurance….

2. From 2008-2027, you have been going through Void Luck cycels, I would suggest you focus on self-impovement during this period. If the Year Pillar is favorable, then things would be smoother during that year, but may not be so next year (unfavorable). Overall, it will be best for you carefully choose your next step and do some more study regarding your friends insurance team before making the commitment

3. As for your concerns regarding the graveyard elements in your chart, I wish you can understand that Four Earth Branches Chou, Chen, Wei, Xu are not just the graveyards of the five elements, but also the storages for the five elements. A element will only enter the graveyard when the qi of the element is extremely weak. In your case, Ren water DM has two metal resource element and sitting on the its storage Chen, therefore it is not in the graveyard.  Xu earth is the storage of the fire element, there is Ding fire hidden in Xu, it means that wealth can be stored and be used when needed. This also suggest that you should make safe investment when your financial status is prosperous.

4. Lastly, whether your hour pillar is Xin Chou or Ren Yin, the qi of Ren DM is still weak. Favorable elements still would be metal and water. From 2020 to 2021, your overall luck should improve during these years.

I have been study Fengshui and Bazi for several years. View more posts

9 thoughts on “A Natal Chart with bad wealth Luck Currently”

This site uses Akismet to reduce spam. Learn how your comment data is processed.